A phishing attack is a user security violation which targets a user to trick them into revealing personal, sensitive information (for example, passwords, phone numbers, or credit cards). There are several kinds of phishing. Users can be contacted by email, telephone, text message, or malicious URLs. The content of a Phishing site pretends to act, or looks and feels, like a trusted entity — a browser, operating system, bank, or government. This AdSecure detection is based on Phishing URL violations from Google WebRisk.

What is a common indicator of a phishing attempt to an end user?

We could define a phishing attack as one of the most effective ways for cybercriminals to steal our information. In 2021 Q3, AdSecure saw big spikes on Phishing attack detections, which increased by 413.97%. After analyzing the violation data from Q1 2022, AdSecure also noticed a 178.46% increase in Phishing detection compared to Q4 2021.

Phishing scams are created to make the user believe they are on a genuine site, and a lot of time is spent in making these sites indistinguishable from the real ones. So, what should we look for when trying to identify a phishing site? 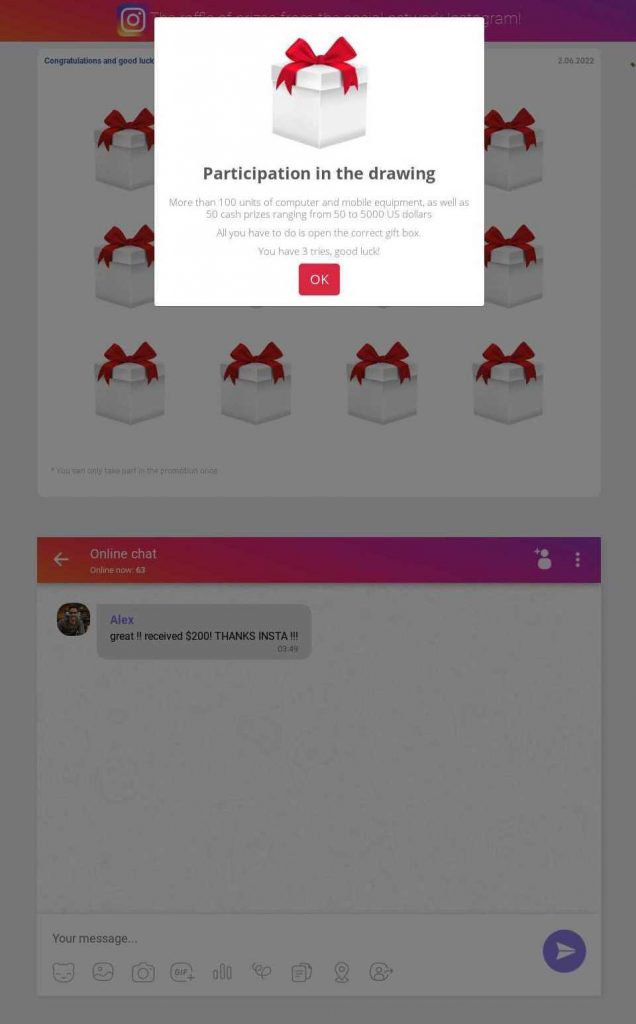 The landing page of this ad is a lucky draw with a fake Instagram logo on it. It uses prizes such as computers, mobile devices and cash to lure users to play and tries to convince them that it is a legitimate activity sponsored by Instagram.

The URL of the page is blacklisted by Google safe browsing. Also, If the user tries to reach it, the Google Chrome browser will show a warning message such as the one below.

How to protect the end user against a phishing attack?

It seems that phishing attacks have never failed to be the most popular tactics cybercriminals use for their personal gain. Publishers and ad networks have a duty to serve clean ads, keeping their end users safe. Having a dedicated compliance team, and an ad safety solution such as AdSecure as the first line of defense against cybercriminals is key to reinforce Google Ads Policy and make the internet a safer place.

AdSecure is a 360 degree ad security and quality solution that offers tools such as Active Monitoring, Real-Time Blocking and Threat Intelligence in order to keep online sites clean and secure for the users, improving their browsing experience and avoiding negative online experiences. AdSecure’s system can detect and stop malvertising campaigns and Security Violations such as Phishing attacks. They allow the rejection or suspension of malicious ads real-time.

Read more about how Malvertisers use Phishing to exploit end users by reading Goal 2: To extort personal or financial data from end users, in our blog post What is Malvertising and how to stop it